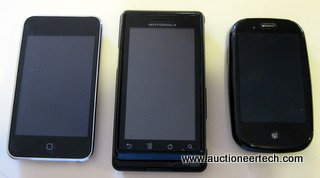 The Motorola Droid is less a phone with smart capabilities and more of a computer with phone capabilities. I’ve had my Droid for just over 24 hours, and this review will primarily compare the Droid with the Apple iPhone and Palm Pre. I’ve been using the Pre since June, and while I don’t have an iPhone, I do use an iPod Touch and am familiar with the app store and interface. I’m staying away from comparisons with Windows Mobile and BlackBerry, in my mind the current fourth- and fifth-place smart phone platforms, respectively. I believe neither platform is anywhere close to as powerful, usable, professional or advanced as Apple’s iPhone, Palm’s WebOS or Google’s Android. 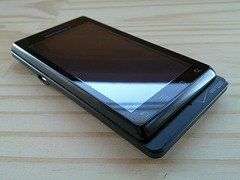 The physical shape is perfect. It’s large enough that it doesn’t feel cramped and yet small enough to not cause you to look like you’re holding a computer to your ear. The edges are crisp and industrial looking, and the body sports a flat black finish.

Phone
This phone is loud. I don’t remember the last non-corded phone that I could hear without complaining or constantly pressing the increase volume button on the off-chance that I bumped the decrease volume button in the two seconds since the last time I hit increase volume. I can’t make a call comfortably with the Droid at full volume. Not only is the experience right for the Droid user, the transmitted volume level is stronger as well. In one of my first calls, the other person told me to be careful not to be too loud when I was speaking. The Droid improves other people’s experiences.

This phone is heavy. It’s not uncomfortably heavy in a way that will make you tired when you’re using it. It’s heavy in the sense that it feels great in your hand and isn’t going to blow away. One of my complaints the Palm Pre is that it’s too small, too light and feels cheaply constructed. The Droid isn’t any of these things.

This phone gets service. It’s on the Verizon network, widely accepted as the carrier with perhaps not the fastest data network, but certainly the widest coverage area. Verizon’s recent purchase of Alltel means that their coverage is superior in the Midwest, especially in rural areas.

Future-proof number portability is assured with complete integration with Google Voice. I’ve covered Google Voice here before, but until now my usage of Google Voice when mobile was limited to using clunky apps that initiated voice calls by having Google Voice call back or by calling Google Voice and navigating the dial prompts. Google Voice on the Droid actually results in a change to the phone’s native dialer so you don’t have to think about using Google Voice before making calls. Now, the only time I’ll have to remember my Verizon number is when I’m dealing with Verizon; the Google Voice number shows on caller ID, not the Verizon number.

Internet and data functions can’t be used at the same time as the phone or SMS functions. It’s not a fault of the Droid or the Android but rather of the current CDMA network itself. The CDMA coverage in the Midwest is so much better than GSM, however, that this limitation is barely worth mentioning.

Mobile office
The Droid is the perfect business device. Must-have features such as Microsoft Exchange/Outlook support and a removable battery mean that this phone can be your connection to your office. I haven’t had the phone long enough to make a comprehensive comment to battery life, but so far it seems to be much better than the Pre’s battery.

Official tethering support is coming in 2010, meaning it can serve Internet to your computer. If you don’t want to wait, and you have a Windows computer, June Fabrics has a version of PdaNet for Android that will tether without hacking. 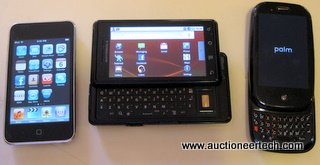 The enormous 5 MP camera has auto focus, zoom and dual-LED flash. There is a dedicated camera button located where a standard point-and-shoot would have the shutter trigger button. This button on the Droid also serves to launch the camera app, so a picture can be taken at any time simply by a long-press on the camera button to load the camera application and then pressing the button to take the picture. The included 16 GB storage card provides a ton of space for these high-resolution images that are so easy to take. The camera supports DVD-quality (720×480) video capture, and a third-party application called Qik allows instant, live streaming video to the web at the press of a button. Another application, called Shopsavvy, allows the camera to scan product bar codes, showing you product offerings based on proximity or price.

Applications are a joke if you can only use one at a time. The Android’s multitasking isn’t quite as intuitive as the Pre’s, with no clear way to understand which apps are running or to quickly switch back and forth between them, but it does allow multitasking and I have yet to be confused or even take any issue with the application switching in Android.

The Droid does turn by turn directions. For free. The news in late October of Google’s free GPS application destroyed the stock of Garmin and Tomtom. The share price of each went down 16% and 21%, respectively, in one day. I think it’s safe to say that the mapping and GPS on the Motorola Droid are more advanced than any other portable device.

I have never found voice recognition useful. Even products such as Dragon Naturally Speaking have came up short for even my most basic of hopes, to say nothing of providing functionality that is beneficial enough to integrate into my work flow. I had the Droid for over 8 hours before I noticed the microphone icon, prominently displayed in the primary search bar on the Android desktop. I touched it and was presented with a prompt that said speak now. I said “directions to Medicine Lodge”. It didn’t load the browser. It loaded the GPS application and automatically began directing me to Medicine Lodge, Kansas. I said “call Diane Poe” and it called my fiancé without even prompting me to confirm my intentions. Other inquiries are converted immediately to Google searches with the results immediately presented. Unlike every other voice recognition program I’ve ever used, the Droid’s voice command actually works in a useful way.

Entertainment
The Droid comes with the Amazon MP3 store, a very mature and robust marketplace for DRM-free albums and songs. The music player is feature-complete, unlike the Palm Pre, and the Google Listen application brings podcast support that simply embarrasses the iPod Touch.

The phone’s speaker is much louder than any other device’s speaker. Listening to music at full volume in a room is almost so loud as to be slightly unnerving.

The Android Market is a mature app store, unlike the store for the Palm Pre. While it may not have as many applications as the Apple app store, we’ve found an app for every function we’ve needed. Loopt, Last.fm and Qik were nowhere to be found on the Palm Pre. They all work flawlessly on the Droid.

Droid vs Pre
Where does the Droid fall short against the Palm Pre? The Droid doesn’t have a mirror. The Droid is a horizontal slider, which isn’t nearly as convenient as the vertical sliding keyboard featured by the Palm Pre. The Palm Pre’s operating system is very intuitive when it comes to multitasking. There isn’t an easy way to zoom out and see previews of the multiple applications that are running in Android at the same time. As I mentioned, it hasn’t been a problem so far since everything in Android is intuitive enough to use without difficulty.

Image by Getty Images via Daylife

Droid vs iPhone
Where does the Droid fall short against the iPhone? There is no question that Apple has the app store lead, closing in on 100,000 applications while the Android Market houses just over 10,000 apps. The app count isn’t as important, as I mentioned, since there seems to be an Android app for everything I’ve imagined so far. The iPhone does have a robust desktop management application in the form of iTunes, but the days when syncing your device to your computer with a cable was the cool thing to do should be long behind us.

Summary
The Motorola Droid is quite surely the most remarkable device I have ever seen. The physical keyboard, multitasking and high-resolution screen place the Droid squarely ahead of the iPhone, and the quality construction, call quality and Android Market apps are easily enough to best the Palm Pre. All the other features in the article above simply widen the lead against the other competitors.