The end of the sitemap as we know it

Back in the days of the FAQ and the image map (remember when you would hover your mouse over a picture and different parts of the graphic would link to different pages?), web designers used a website element known as a sitemap or site index. Modern sitemaps are valuable tools that are submitted to search engines. Sites that still make sitemaps available to the public as navigational elements are behind the times.

When most of us think of a site map, we still think of the link in the footer that takes us to a page that lists all the pages on a site. It used to be the case that sites were so unusable due to browser incompatibilities or lack of developing with web standards that some pages were simply not accessible or not findable by some users without the use of a site map. As such, their use became a trend that in some circles persists to this day.

The problem is that nobody uses them any more. In 2002, a study by useit.com found that 27% of users utilized a site map. That’s a high number, but not when we learn that they were specifically asked to “learn about a site’s structure.” In 2008, the same study found that the number had dropped to 7%.

A user seeing a large list of links isn’t going to have any reference as to the value of those links. Your carefully-designed click-stream, your conversion goals and, most importantly, the user experience are all compromised. Designing using web standards with clear and well-organized navigation that is void of usability land mines such as drop-down menus or Flash navigation will improve accessibility and put the final nail in the coffin of the already-obsolete site map as we know it.

The phrase “as we know it” is important because modern sitemaps are very important for search engine visibility. A sitemap, in the eyes of a search engine, is a carefully crafted XML file that is uploaded or made available on your site. This sitemap has information in it that specifies the page location, the last time the page was modified, how often the page changes and how important the page is. Here’s an example from the official sitemap protocol page at sitemaps.org.

As you can see, a modern sitemap is nothing like the old sitemaps from when the web was young. 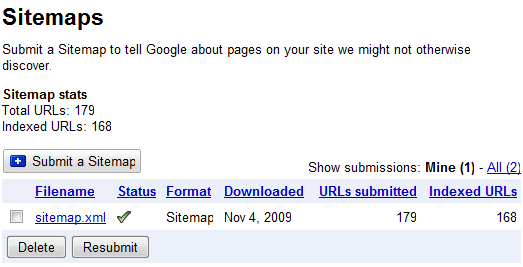 There are programs that will generate your sitemap for you. They crawl your site and present you with a list of your pages. You then go through these pages and rank them by priority and specify how frequently they change. The program will give you the sitemap file when you can then upload to your favorite search engine. Google’s Webmaster Tools has a Sitemaps section. WordPress and other popular blogging and content management tools have plugins that will automatically generate a sitemap.xml file for your site and submit it to Google. Our AuctioneerTech site map section is shown here.

Don’t let yourself get charged extra for sitemap submission – it’s not an add-on service. Sitemap submission is an integral part of building modern websites and should happen before any website project can be considered complete.

If you’re working with a web developer, make sure he/she is submitting a sitemap.xml file to search engines. Also, don’t forget to make sure that you leave the link list safely in the past where it belongs and off of your public website.