We’re putting the final wraps on the 2010 KAA Convention at the Wichita Airport Hilton. 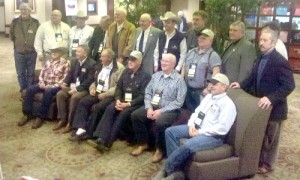 Past presidents of the Kansas Auctioneers Association

Lynn Langvardt was the winner of the Kansas Livestock Bid-call Contest held in El Dorado on Thursday night. Last year’s livestock champion, Charlie Cummings, won the KAA Bid-call Contest this year at the state fair and was installed Saturday night as the new state champion.

Here’s some video that was streamed live via Ustream using a Motorola Droid. It features current IAC Champion Kevin Borger, KAA Champion Charlie Cummings, and others selling during the fun auction on Friday night.