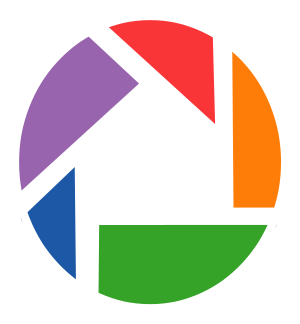 Sometimes there is a piece of software that is so obvious for a specific need that we make assumptions. We assume that everyone uses it and, if not, that those who don’t at least know about it and for some unreasoned purpose decide to use something lesser. A few products fit this description, but in our minds none more so than Google Picasa.

Picasa manages your photo collection. It sounds like a simple description of a simple task, but if you’re using anything less than Picasa you have no idea what this description means. We’ll touch on some highlights here, and finish up with both Google’s official video and the reason you may want to be cautious about using Picasa if you’re an auctioneer looking for ways to manage pictures for your inventory.

To start with, Picasa is very focused specifically on photos. It doesn’t work well with graphics or clip art; it does neither vector nor pixel-level bitmap edits like Illustrator or Photoshop, respectively. If you took a picture with a camera, that picture belongs in Picasa.

Picasa isn’t really content working with individual directories of images on the fly. Like iTunes, Picasa wants the entire workflow occur within the program, which you load first before you access and interact with your content. Unlike iTunes, Picasa is somewhat less pernicious and bloated in the way it handles controlling your tasks.

Picasa assumes that you’re going to plug in your camera and use Picasa to transfer the images from your camera to a location selected by Picasa. Picasa pulls the meta data from the pictures – information such as date taken – and sorts the pictures accordingly. Just in case you somehow (gasp!) get pictures on your computer through a means other than Picasa, the folder manager constantly watches the places on your computer most likely to receive new pictures so these additions can be quickly added to Picasa’s collection.

Once Picasa has your photos, you’re able to do just about anything you can imagine. Image adjustments and enhancements from brightness and contrast to red-eye to cropping are all a simple click away. Uploading images to Google’s Blogger service or Google’s Picasa Web is a one-click task, allowing you to easily and immediately share your pictures with the world. The option to order physical prints of your pictures generates an option list that reads like a who’s who of picture printing vendors. 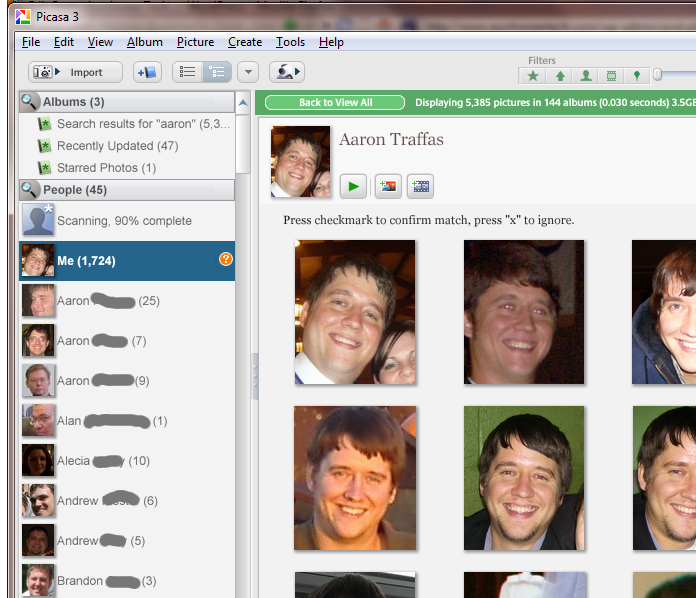 By far and away the most impressive feature of the latest release of Google Picasa, version 3.5, is the facial recognition. Picasa 3.0 was advertised to have face recognition, but we honestly never figured out how to use it. Not so with Picasa 3.5. The top of the left navigation pane now features a people section. In this section, Picasa automatically close-crops the faces from all your photos and groups them together for you to name. Once Picasa connects to your Google account, your Google Contacts synchronize with Picasa to make associating contacts with the face groups as easy as selecting from a drop-down menu. Once you’ve associated a face with a name, future pictures indexed by Picasa with that person will generate a match suggestion, shown in the graphic on the right as the question mark in the orange circle, which you can confirm or deny. Picasa learns and adapts to increase the accuracy of future groupings.

Picasa’s face recognition will own you. Easily more addicting than the most captivating of games, we lost an entire weekend to tagging our catalog and making sure each face was correctly identified. It’s now trivial to locate every picture in our collection containing a specific person.

Picasa is an amazing photo management tool that makes simple editing lightning fast. Fast picture editing is an auctioneer’s dream, but there is one slight road bump that takes some getting used to. We mentioned above how Picasa wants to manage your collection. As auctioneers, we want to take a folder of pictures for an event and process everything in that folder. While we always continue to store images for posterity, once the auction is over we don’t necessarily need to be bothered by those old images, so maintaining them in our collection isn’t really ideal. Picasa needs to index a directory before it will allow you to perform actions on it, and even when you select a specific image and ask to edit in Picasa, it may take a while before Picasa gets around to indexing that directory.

Equally difficult to understand is the way Picasa exports content. Unlike most other batch-processing image manipulation programs like Arles Image Web Page Creator or Irfanview, Picasa doesn’t allow you to set a relative export directory. That limitation means that instead of saying that you want to save all your pictures in a sub-directory of the original folder, Picasa requires that you browse the directory structure to select an export location. This can be a very annoying process with which to become accustomed.

Google Picasa is unquestionably the best tool to manage your personal photo collection. Because it’s free and an all-in-one tool, we believe it to be also much superior for business than the GIMP or Photoshop combined with Arles or Irfanview that most auctioneers currently use, especially once you become accustomed to the workflow changes.

We’ve touched on the highlights. Here’s the video from Google if you’re interested in seeing Picasa in action before giving it a try.

Are you sold on Picasa? Get it for free from picasa.google.com. Are you scared of the face recognition features? Are you confused or frustrated by the imposed workflow changes? Are you a fan of a lesser photo management system like iPhoto or Windows Live Photo Gallery? Let us know in the comments.