The folly of the artificial bidding window

You’ve just signed the contract for a large estate auction. The lead was given to you by your cousin in a neighboring town, who had a neighbor – your new seller – who was interviewing different auctioneers for the job. Your cousin, a long-time evangelist for your services, found out and basically sold the seller on your services before you got there. All you had to do was walk in and sign the deal.

On the way to your car, your cousin sees that you’ve got your briefcase and a smile and comes over to congratulate you on booking the auction. He’s dismayed when he learns that he’ll be on vacation on the day that you’ve booked the event. “That’s too bad. I really wanted to bid on the collector car that I’ve been eyeing over the fence for the last few years. What do you say you let me place an absentee bid right here and right now on it?”

What do you do? Do you say, “Sure! What’s the highest you’ll bid?” Do you say, “I’m sorry, but you can’t bid yet. I won’t let you tell me how much you’ll bid until a week before the auction.” 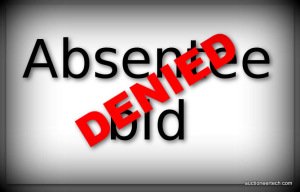 There is a disturbing practice in the auction industry that I absolutely can’t wrap my head around. There are auctioneers who, when it comes to Internet auctions, choose the second of the two options in our scenario above. They won’t accept bids on items that are legally booked into an auction. I’m going to leave that period there to let this concept soak in.

Historically, before the Internet, we might have a few absentee bids turned in by phone, on paper or in person by someone during an inspection, but we were pretty much limited to the bids we could find during a live auction. Before the Internet, I don’t know that I ever heard of someone turning down a paper bid because it wasn’t close enough to the auction.

With the advent of Internet bidding, however, I’ve started to see auctioneers who will wait until a bidding catalog is complete before turning on bidding for any of the items. I’ve even seen auctioneers who will have a complete catalog advertised on the website for days or even weeks, waiting to turn on the bidding until a week or a few days before the auction. Because it builds excitement. No, it doesn’t. More on that fallacy later.

As auctioneers, we have a fiduciary obligation to our sellers. Once we’ve signed the contract, it’s our job to take bids. That’s what we do. Our attitude should be one of desperation for any bid we can find – we should be looking in every nook and cranny, behind every door and under every rock, hoping to find a bid that we can gobble up in hopes to add to the running total that is the current bid for each and every item in our auctions. We shouldn’t care how or when a bid comes in, we should only be thankful that it came before we said sold.

With that attitude in mind, once we book an auction that has Internet bidding in any form, it should be a race to get the items listed on our website. Popular financial talk show host Dave Ramsey uses the expression gazelle intense to describe the necessary urgency of getting out of debt. I submit that we should be gazelle intense about getting the items in our auctions up on the web so that we can begin taking bids as soon as humanly possible.

Could there be a benefit to waiting on a catalog to cook before turning it on? Does it build excitement? No. It actively depresses bidding activity. Have you ever been excited to wait for something that you wanted?

I buy a lot of things on the Internet, but I’m frugal about it. I’m an avid subscriber of Amazon Prime, and I frequent eBay and have a slew of browser plugins like PriceBlink that let me know for sure that I’m paying the lowest price for an item. The only thing that trumps price is time. I don’t like to spend a lot of time hunting for something. If I can perform an action and be done with the task of buying something, at least done enough to move on with my day, I’m going to opt for the fastest experience before necessarily the lowest price. What this means is that I want to do something right now, even if it means I’m not going to make the purchase right now.

If I find a widget that I want on your auction site, and I can’t bid on it yet because the magic bidding window hasn’t arrived yet, am I going to be excited to come back? Nope. I’m going to go back to Google and click on the next link down. Only in the rare case that you’re selling something that is very hard to find will I create a reminder of some kind or remember to come back. And when I have to take that extra step and wait, I’m not going to be happy about it. My opinion of your company is not going to be favorable because you’ve hijacked my time, which is often more important than the lower price that I’ll get to pay because you didn’t take bids from everyone else who saw unavailable bidding and didn’t come back.

Not allowing Internet bids until a certain date is like booking an auction but walking around with your fingers in your ears until a week before the event. Creating an artificial bidding window violates the trust of our sellers, depresses bidding activity and is deleterious to a passionate buying community that we should all be trying to build for our companies and the auction profession.

Do you disallow bids until a short time before the auction closes? Am I wrong? Let me know in the comments to this post, not on Facebook, so everyone can see what you think.