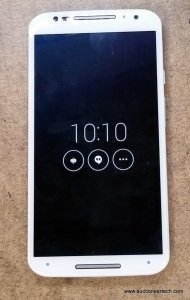 The original Moto X, released in 2013, was the first phone designed and built by Motorola as a Google property. As such, it featured an interface that was remarkably clean and close to the stock Android experience, with a few custom features for good measure. Unfortunately, while I loved the user interface of the original Moto X, the hardware was mid-range at the time it was released and so buying the original immediately felt like a compromise.

The successor, the new Moto X, is essentially a straight-up hardware upgrade from last year’s model. Verizon let me spend a few weeks with this new Moto X, and it’s quite definitely the best user experience of any Verizon phone I’ve used.

The hardware improvements are primarily in the areas of size, speed and camera. The phone is simply bigger, faster and has a better camera than the original X. However, the strength of the Moto X is definitely in the user experience, and by addressing the primary complaint filed against the original Moto X – that the hardware just wasn’t good enough – Motorola can now compete with the flagship devices from other manufacturers.

The software is beautiful. It’s clean and as close to a pure Android experience as anything you can currently find on Verizon. The notification shade is bereft of the clutter found in Samsung’s TouchWiz or HTC’s Sense. The addition of the Google Now Launcher creates a nearly Nexus-like experience.

Instead of cluttering up Android by making changes to the interface itself, Motorola has instead focused creating useful, innovative apps. They’ve included Moto Assist, Moto Actions, Moto Display and Moto Voice.

Moto Assist allows the phone to sense the current conditions and adjust automatically. It silences itself and keeps the screen off while you’re sleeping. It can read text messages and automatically connect to Bluetooth when it notices that you’re driving. It can mute notifications or send automatic responses when it knows you’re in a meeting. In short, Moto Assist pays attention to what you’re doing and makes adjustments accordingly.

Moto Actions allow you to interact with the phone by gesturing in front of the custom infrared sensors on the front. You can wave to silence alarms or phone calls or twist the phone to open the camera. Also, the phone senses when you’re reaching for it so that it can trigger Moto Display before you even touch it.

Moto Display leverages the AMOLED screen to display notifications without waking the phone. AMOLED can fire specific pixels without the battery cost of turning on the whole screen, and Moto Display makes use of this ability to fade in and out the time and notification icons intermittently. It’s actually creepy how the phone seems to know when you’re looking at it and lights up spontaneously.

Moto Voice is always listening. Using a low power part of the processor, it can be triggered without first waking the phone. Simply initiate it with “okay, Moto X” or other custom launch phrase and then talk to it as it sits on the table. 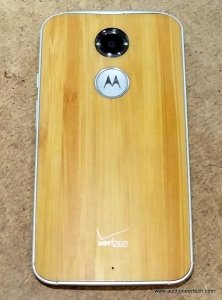 The new Moto X is available with a bamboo back, but not a removable back

Unfortunately, the second generation Moto X does have some drawbacks. It does have a 13 megapixel camera, which is a big improvement from the first generation X and the same size found in the current crop of flagship phones, but it doesn’t seem to be quite as good as the camera in my LG G3, possibly due to the lack of optical image stabilization in the X. It’s a good camera, and I’ll include some shots at the end of this article, but I don’t know that it’s the best on the market.

The biggest disappointment I have with the Moto X is the battery which is not upgradable. Motorola’s done a good job building a phone that doesn’t use a ton of power, but the bigger screen and faster processor were accompanied by only a tiny increase in battery size from the original Moto X, which had a pretty cramped battery to begin with. The battery on the new Moto X got me through about six hours of moderate use. I could stretch that runtime to eight hours or more by compromising on features – turning down location accuracy, reducing notification frequency and using Greenify to hibernate apps that didn’t need to run in the background. As long as you’re prepared to charge the phone once or twice throughout the day, or you don’t need Bluetooth, GPS and real time notifications from all your apps, the small battery shouldn’t be a big concern.

All in all, the Moto X is a phone with competitive hardware and, in my opinion, the best Android experience on Verizon. The clean interface, coupled with the truly helpful Motorola apps, creates an experience that feels not like working with a phone but, instead, using a phone that is working for you. 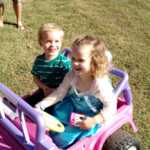 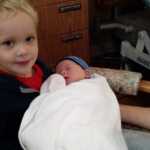 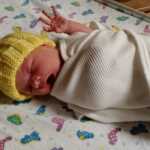