Remember the last decade? Those were the days. We used MySpace, we built websites that had FAQs and sitemaps, our laptops had DVD drives and we actually spent $100 or more on stand-alone GPS devices that lived in our cars and trucks and told us which way to turn. 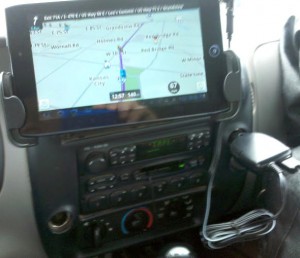 Waze on a 7" tablet in Kansas City

These days, purchasing a dedicated GPS device is silly. There’s no reason to have a device with such a limited use that’s outdated the moment you buy it. While it’s true that most GPS units can be updated, it’s still a hassle and an expense for a device that – at it’s updated best – is inferior to something we already carry with us wherever we go. Today, our smartphones and tablets have mapping abilities far superior to anything a dedicated GPS can offer, we take them with us when we leave our vehicles and information we receive from the cloud is always more current than the maps saved and stored in our unconnected and outdated GPS boxes on the dash.

Google Maps
Preinstalled on Android and iOS phones and tablets, Google Maps is the most reliable and accurate mapping software I’ve seen. Rather than spending a ton of money on a GPS unit, I can now spend $3.57 on Monoprice for a windshield mount that keeps my phone conveniently in front of me. I recently purchased a tablet mount, which puts a beautiful 7″ map directly in front of me as I drive.

Waze
A relatively new alternative to Google Maps, Waze has recently become my preference for longer trips. Waze uses crowdsourcing to bring real-time road and traffic conditions to the maps of its users. Waze users are known as Wazers and their devices are continually updating ground speed to Waze. Portions of roads where current traffic speeds are significantly below the average road speed are highlighted and a speech balloon tells you the current average speed. Knowing when there are traffic jams ahead of you will let you find an alternate route. When a Wazer sees a police trap or a road hazard, a couple of easy button presses allows that report to be sent to everyone else using Waze in the area.

Waze brings game features to traveling. Each report of road conditions is rewarded by points which you can compare against a leaderboard of your friends or of all Wazers in your state. Roads that haven’t been visited by other Wazers are signified by dots on the road. When you drive down these untraveled roads, your car turns into  Pac-Man which chomps the dots, rewarding you with points.

Waze works everywhere, but it learns appropriate routes based on the way it’s used. The more people who have used Waze to get to your destination in the past, the more accurate the guidance will be. Accuracy is based on usage, so it’ll be more accurate in the cities than the country. The community reporting functions are obviously currently more valuable in urban settings than on rural roads and will likely continue to be until it’s more widely adopted. Until then, I’m going to keep munching the dots on the dirt roads and using Google Maps when I honestly don’t know how to get to my rural destination.