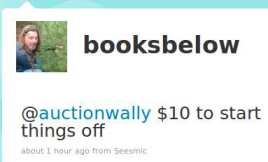 A bid being placed for a Twitterauction

We frequently write about Twitter and its many benefits. We frequently visit our sister site at AuctioneerTweet to see what auctioneers are saying on Twitter. Today, however, we noticed something new. Actual items are now being sold on Twitter using the auction method of marketing.

Walt Kolenda, better known as AuctionWally, has conducted several Twitterauctions, as he calls them. “So far they’ve been pretty successful, small items so far. Sold about 75%!” Said Kolenda, “Items that didn’t sell didn’t get bids. I won’t do reserves at these auctions.”

The mechanics are simple. Terms, pictures of the items, as well as very good descriptions, are posted on his site at auctionwally.com. In order to place bids on the items, all that is required is a message sent to his Twitter account before the bidding closes.

Kolenda says he doesn’t see downsides, but just as there is much more to a traditional auction event than simply calling bids, the same is true for Twitter. “…there are definitely certain details you have to take care of,” he says. “You can’t just throw one out there and expect bids.” He’s published an eBook, entitled “How to do Auctions on Twitter“. From the order page:

By the end of this eBook you’ll know exactly how to set up a Twitter auction, how to promote it, the other tools you’ll need to make it profitable, the types of items that will sell, how to invoice and how to accept payment.

We have mixed feelings about the process. While it seems like a new and intriguing method of accepting bids, it seems limited in the amount of items that can be sold per period of time as well as the direct labor involved. What are your thoughts? Does this method sound like something you’re going to try? Let us know in the comments.

This entry was posted in services and tagged Twitter, AuctionWally, Social Networking, Twitterauction. Bookmark the permalink.