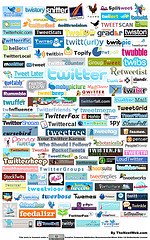 It’s no secret that we’re enamored with Twitter. Our AuctioneerTweet site has over 45 auctioneers listed and it seems we’re continuing to add several each week as more and more auctioneers join Twitter.

Twitter is useful. It’s replaced instant messaging and reduced our use of email and Facebook. Even so, the actual Twitter website leaves much to be desired in the way of a usable interface. Indeed, Twitter’s biggest strength comes from their open access system that lets anyone build clients or services around Twitter. We’ve tried many, and here are our favorites.

Desktop clients
Tweetdeck and Seesmic Desktop (known as Twirl until a week ago) are two clients that are currently vying for our attention. Unfortunately, each is built on Adobe’s Air platform which means that you have to install a framework package before you can actually install the application. Both clients support a multi-column view that lets you display your @replies and direct message in separate columns. Seesmic supports multiple Twitter accounts simultaneously and, on the surface, looks more polished, but so far it’s been a little buggy for us. Tweetdeck isn’t as pretty, but it supports Facebook, Twitscoop, StockTwits and 12Seconds. Seesmic’s picture capabilities are much more robust than Tweetdeck’s singular support for Twitpic. For now, Tweetdeck is the reigning champion unless you need to manage multiple Twitter accounts.

Web clients
There are several web clients that are superior to the original twitter.com. Our two favorites are Tweetree and Twitterfall. One of the difficulties with a standard timeline view in Twitter is that it’s difficult to understand the @replies. Tweetree turns a timeline into threaded conversations like a forum or bulletin board so you can see the original messages that sparked the replies. Twitterfall, on the other hand, displays a timeline view in real time. New tweets fall from the top of the screen to the bottom. You can control the rate at which they fall and which tweets are included in the timeline. It makes it very easy to search tweets from all Twitter users in real time by entering a search word or phrase and having all tweets matching that phrase show as they’re created. Want to monitor Twitter for all references to the Palm Pre? Twitterfall makes it easy.

Mobile clients
A big component to Twitter is mobile integration. The most basic form is interacting with Twitter using simple text messages. Just as Twitter itself isn’t the greatest web client, using Twitter by text message isn’t the greatest way to use it on the go. For the iPhone, Tweetie easily bests runner-up Twitterific, supporting multiple accounts and search while Twitterific is strictly a basic client. For Windows Mobile, Pocketwit is the prettiest application and supports the most features, though Tiny Twitter is easier to use for basic functions. We still acutally use ceTwit to upload pictures directly to TwitPic since neither Pocketwit nor Tiny Twitter is very easy when it comes to pictures.

Other services
Two other services deserve mention. Each has the ability to be embedded on a website in the form of a widget. We mentioned TwitPic above, which can be embedded to show the most recent image uploaded. That image links to your TwitPic timeline so users can click to see all the other pictures you’ve posted. For an example, visit www.aarontraffas.com and look at the TwitPic widget in the right sidebar. The other service worth noting is TwitterCounter which charts your followers over time, predicts what they will be based on previous rates of increase or decrease and allows you to embed a badge on a website showing your number of followers. You can see an example of TwitterCounter’s badge at the top of the Social widget in the right sidebar on AuctioneerTech.

Remember, realizing Twitter’s value is difficult until you use it. Hopefully, using one or more of these clients we’ve listed will make it easier to use or give you an idea for using Twitter in a different way. Don’t forget about AuctioneerTweet. Follow us on Twitter at www.twitter.com/traffas.