Types of Internet bidding and classes of providers

Internet only
When the items sell based solely on the bids from the Internet, it’s an Internet only auction. Internet only auctions may have a bid caller and they may have a crowd, but when software is calculating the time remaining and the current and final bid prices, it’s an Internet only auction. Internet only bidding is sometimes referred to as an eBay-style or static auction, but those are horrific terms for it. Modern Internet only auctions have staggered endings and automatic extensions, more closely simulating a live auction. These modifications move the game so far away from eBay rules that there isn’t a legitimate comparison. The term static implies nothing changes. It’s very definition means fixed or motionless and the auction industry is doing itself an enormous disservice by using the word static to refer to this very active and exciting method of bidding. This method drastically lowers overhead, as well as provides a viable means of selling small groups of assets in multiple locations. 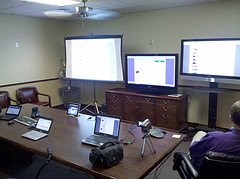 Pre-auction Internet bidding
Pre-auction bidding is the method of accepting Internet bids up to a point slightly before the auction begins to end and representing the Internet bids as absentee bids against the live crowd. This method offers the advantage of increased speed of the event as the auctioneer can see everyone who can possibly bid and doesn’t have to wait for an Internet bidder he can’t see. When the live crowd is done bidding he can sell the item and move on. It offers the convenience for buyers to place bids without having to attend the event or sit in front of a computer.

Real-time Internet bidding
Real-time bidding is probably the most common type of Internet bidding currently. The process involves an audio or perhaps video stream so that buyers can view the auction as it happens on their computers. They can place bids during the auction based on the audio and the display of the current bid price on their computers. This method has the advantage of allowing bids right up until the second the item closes, but forces users to wait in front of their computers until the items in which they’re interested sell. Many buyers no longer have that time available, or, when first seeing the auction, plan to sit in front of the computer during the event but forget by the time the auction starts to end.

Portal site solutions
When Internet bidding is offered but that bidding occurs on the website of a third party, that third party is a portal. That is, auctions from many auction firms are listed and the bidding is all handled within that site. This method offers the benefit of cross-promotion, where the customers driven to the site by one auctioneer may see the assets listed of another. The downside is that it makes brand-building very difficult and makes buyer retention next to impossible. This kind of solution is very good for an auctioneer who needs results quickly. Examples of this kind of provider include Proxibid, Bidspotter, AuctionFLEX, and NAA Live.

Integrated solutions
The concept of an integrated Internet bidding solution is less well-known in the industry. An integrated solution embeds the Internet bidding pages within the website of the auctioneer. The software may not reside physically on the auctioneers’ servers, but the website is built so that the buyer can’t tell the difference and never sees any logo or promotional materials of the provider. This method has the advantage of being excellent for building a brand and buyer retention, but has the disadvantage of taking some time to build a buyer base. Examples of this kind of provider include JBS Software’s Maxanet and NextLot.

Do you use a provider other than those listed above? Let me know in the comments so I can learn about them and reference them in the future.