Jolicloud is a fast, cloud-based OS for netbooks 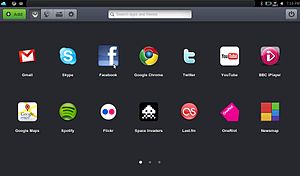 I’ve had a Eee PC 901 netbook for the last couple years. I’ve had various version of Ubuntu Linux installed on it, including the netbook remix, and recently tried Peppermint and Lubuntu. By far the most enjoyable netbook OS I’ve tried – and am currently reinstalling because it’s better than everything else  – is Jolicloud.

Jolicloud was designed from the ground up to be a netbook OS. The environment is closer to the functionality of a smart phone – iOS or Android – than it is to a desktop OS like Windows or Ubuntu.

Jolicloud is truly a cloud OS. Like Google’s upcoming Chrome OS, Jolicloud synchronizes all your settings to your account, so when you login to a Jolicloud installation on multiple computers, your history and settings are retrieved and accessible. Unlike Google’s Chrome OS, however, Jolicloud offers the power of a traditional OS, allowing you to install standard Linux applications and alternative browsers as well as access local file storage and devices.

The cloud installation is so well-done that you can actually use your Jolicloud environment from any computer that runs Chrome. Simply go to jolicloud.com and login to see your netbook’s desktop and applications show in your browser.

The best part about using Jolicloud isn’t the simplicity, but the speed. Recent versions of Ubuntu – even the netbook remix – are slow on my old Eee 901. Scrolling seems sluggish, and there’s always a second or two that I have to wait for applications to load. Jolicloud is so light and fast that it hides the weaknesses of the hardware on which I’m running it.

Jolicloud recently launched the Jolibook, the first netbook that comes with Jolicloud pre-installed.  It’s available in the UK only at the moment, but for anyone looking for a netbook with a netbook OS – especially if you weren’t lucky enough to capture Google’s attention and get a Chrome OS C4 – it’s a fantastic option. It’s also a great option to turn that old, sluggish netbook into a fast, hip cloud appliance.

Jolicloud is a free download, and has an easy step-by-step tutorial for making a bootable USB stick if you don’t have a USB CD drive for your netbook.

Do you prefer a different OS on your netbook? Let me know with the comments.