Wakoopa makes a game out of using software and web apps

Tech startup Wakoopa this week released some intriguing findings regarding software trends. They have relatively-real-time data on the usage of apps like Facebook, Outlook and Firefox, for example, throughout the day. They claim to have logged over 525 million hours of software usage from their 75,000 users. How do they get their data? Why is it relevant? 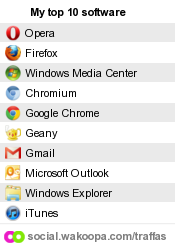 Wakoopa makes using software fun. Very similar to the last.fm, which we covered in January, you install a small program that tracks which programs you use. Ever 15 minutes or so, it reports your usage to the Wakoopa servers. From this data, Wakoopa builds reports for you to see how you are using your time. It allows you to embed widgets that you can port to other locations like Facebook or your blog that show your top software or most recently used applications as embedded now in the AuctioneerTech sidebar. Wakoopa also uses this data to build anonymous, aggregated data sets to report on industry usage.

Wakoopa makes using a software a game. You get varying numbers of points for specific actions such as using a new application that you haven’t used before, writing reviews, inviting friends and using the tracker. You get ranked from newbie to overlord based on the number of points you acquire.

It doesn’t stop there. Wakoopa is a social network of sorts that allows you to make contacts and to see what software your contacts are using. Their teams functionality allows you to create or join a group and gain access to specific usage data. Concerned about Facebook usage eating up your employees’ time? Worried that your employer is too concerned about the couple of minutes you spend checking Facebook every now and then? Make an office team on Wakoopa to find out who is right. Wakoopa tells you – to the minute – how long you spend using each application. It also makes the distinction between applications you’re using and applications that are simply running in the background.

Wakoopa also serves as a recommendation engine. If you’re looking for the most popular apps in a specific category, like word processing, you can learn that the most used software is – no surprise here – Microsoft Word followed by OpenOffice.org in second place. Have you found an application that may work for you but you don’t know how much it’s used? Wakoopa can tell you about it as well as offer reviews from other users.

Wakoopa has clients for Windows and Mac, and promises support for Linux soon. We’ve been using the Windows tracker on XP and Vista machines and it’s very light with absolutely no performance impact on the system. It runs on startup and we haven’t had to touch it since installation.

Do you use Wakoopa? Visit our profile at www.wakoopa.com/traffas and add it as a contact. Do you work for Wakoopa? How about hooking us up with an invite to beta test the Linux version?