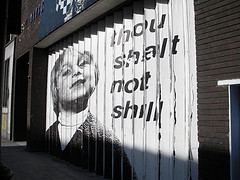 If you’re an auctioneer and you’re bidding on behalf of yourself or your seller, there’s nothing illegal about it provided it’s disclosed properly and that it’s not an absolute auction. However, if you’re going to do it, don’t be sneaky about it. Don’t create a fictitious name or bidding account. Don’t try to sneak the disclosure in the small print in the auction terms. Tell your customers what you’re doing and that it’s legal. Tell your customers who you’ve appointed to bid on behalf of the seller. Don’t let your bid-caller bid, and make it clear what’s going on.

True, creating a situation where bidders are competing against a seller or reserve may disappoint or even upset some of them, but they’ll be nothing short of furious if they find out you’re trying to be sneaky in an attempt to keep them from finding out.

Regardless of the legalities of the methods, sneaking around and trying to accept bids that don’t come from legitimate bidders is an easy way to turn your bidders against you.

This entry was posted in theory and tagged shill bidding. Bookmark the permalink.