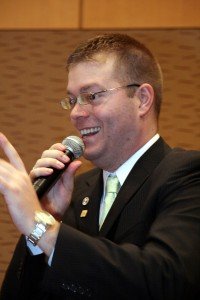 Duluth, MN – A Stillwater man is the 2010 Minnesota State Champion Auctioneer. At the 22nd annual auctioneer championship held in Duluth, Matthew Schultz won the competition in which 27 auctioneers competed.

Schultz will now have his entry paid into the International Auctioneers Championship to be held in Greensboro, North Carolina this July. Asked to describe how he felt with one word, Schultz said, “Awesome!”

The contestants were judged on presentation, chant/voice, effective auctioneering and an interview conducted on stage. This year’s Reserve Champion was Austin Bachman of Ottertail, Minnesota. Rounding out the top five were Kurt Johnson of White Bear Lake, Theresa Ann Larson from Aitkin and Bryce Hansen of Prairie Farm, Wisconsin.

The MSAA celebrated their 60th anniversary at this year’s conference and show, which concluded Saturday night in Duluth. The association is an organization of licensed auctioneers who work to promote the auction profession. As the new champion, Matthew Schultz will serve as a goodwill ambassador for Minnesota Auctioneers throughout 2010.