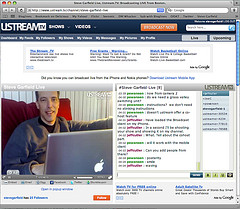 After creating a free account on ustream.tv, you can click the broadcast now button. This button takes you to the control screen which prompts you to allow the program access to your webcam and sound input. Once you grant the access, the video feed pops up and you can start broadcasting. You can adjust some of the quality settings, for example reducing the video quality and enhancing the audio quality if you’re on a slower connection and want to be sure your viewers can hear you. It will also tell you how many current viewers you have.

Ustream generates the code for you to embed, or insert, the stream on a page of your desire. It functions exactly like embedding a YouTube video. You can embed it on your website or on a forum. All it requires is that the broadcaster and the user have Flash installed, and most do.

Ustream allows you to record your streams on their servers so that once you’re done streaming you can embed the recording for posterity. You can also build a community on Ustream. It provides you with your own customizable page, showing your current stream and past recordings you’ve made available to the public. You can also download your recordings at any time to any computer in a variety of formats.

To the right is an example of a public video embedded on a website. This one was pre-recorded, but it would look essentially the same if it were a live stream.

While I’ve certainly used Ustream successfully with the webcam and microphone built into my notebook, the quality can be increased by plugging in a corded webcam or a consumer camcorder that can be viewed as a webcam by the operating system. You can also use an external microphone, or for better quality, use a line-out from a PA.

We’ve used Ustream to broadcast auctions, shows and meetings. Most live auctions from Purple Wave are broadcast on purplewave.tv as they occur using Ustream.

I was playing a show once at a sports bar in Manhattan, Kansas, once and streaming the show via Ustream. Two separate viewers from the west cost called in and ordered rounds of drinks for the band. I initially questioned the logic of streaming the video, thinking that there may be a decreased attendance if people could stay home and watch. These results, similar to the effect of allowing Internet bidding at auctions, put any concerns I had to rest.

It works great for meetings, too. If you have a meeting with attendees in other locations, why not stream the video? Ustream allows you to password-protect your streams, so you can provide a simple password to users you wish to invite. This feature makes it great for company meetings or business proposals.

There are other, similar, services available to stream audio and video. Yahoo’s doomed Live product and Stickam.com are two examples, but I’ve found Ustream to be the easiest to use and the most respectable.

Are you currently streaming video for your auctions, meetings or other events? Do you use a product other than those mentioned? Let us know by leaving a comment.

This entry was posted in services and tagged Ustream, YouTube, Stickam.com, Broadcasting. Bookmark the permalink.