Hard drives fail, protect your data with a Drobo

I guess I’m probably not going to get much Google play out of those two statements, so I’d better keep going.

Hard drives fail. As hard drives keep getting bigger at an absurd rate, they become more complex and more fragile. There are so many moving parts in conventional, platter-based drives that it’s a miracle they work at all.

Is this stance simple fear-mongering? I know I hear it mainly from Steve Gibson of GRC when he’s hawking his Spinrite product on Security Now!. While I don’t necessarily believe that Gibson’s Spinrite is all it’s cracked up to be, I will say with certainty that I’ve had hard drives fail causing me to lose data recently and the $90 purchase of Spinrite will be my first action to try to recover my data.

Having said that, what I would much rather do is have a policy in place that is tolerant of drive failures. RAID stands for redundant array of inexpensive disks. Essentially, a RAID system lets you use multiple drives to either increase speed or increase reliability. I have a Netgear ReadyNAS configured so that any one of its four drives can fail and be replaced without having to turn off or lose access to the data on the drive. If two drives fail, then everything is lost, but the odds favor only one drive failing at a time. The problem with RAID is that each of the drives must be identical in size and speed, meaning that an array of 4 500GB drives must have each of its drives replaced in order to upgrade the storage capacity. 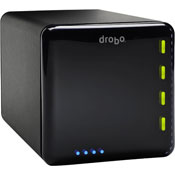 Drobo is different. Drobo’s hardware design is as cool as something made by Apple and the software is as intuitive as something open source. Like RAID, the Drobo is an array of hard drives. Unlike RAID, those drives can be any size. It uses software, rather than hardware, to store the files on the drives in a redundant way so that at any time a drive can fail without data being lost. Where its functionality is superior to RAID’s is that, like the example above, if you have four 500GB drives you can replace one of them with a 1 TB or 1.5 TB drive and increase your available capacity without having to replace all the drives.

The original Drobo, which I have at work, sports a USB interface and software that lets it show up as an external drive on Windows, Linux or Mac as well as report its condition. For network access, the DroboShare is an additional device that connects to the Drobo and offers Gigabit ethernet port to put the Drobo directly on your network.

Data Robotics, the company behind the Drobo, recently released both a new version of the Drobo that supports FireWire 800 as well as Drobo Apps, which are community applications that allow you to turn your Drobo and DroboShare into an FTP server, iTunes media server, web server and more.

The Drobo does have some downsides. The original Drobo, priced at $349, has been discontinued. The new Drobo, priced at $499, doesn’t have enough features to justify the extra $150 for me. Security is also a problem. As far as I know, there is no way to encrypt the entire device as you can with a normal external hard drive. The Drobo uses a proprietary file system, so any one of the drives is useless when removed, but should someone take your Drobo and plug it in somewhere else, the contents would be accessible. I supposed you could create an encrypted partition with previously-mentioned TrueCrypt, but it would be nice if there were support for AES encryption directly in the Drobo software.

All in all, the Drobo is one of the coolest devices I’ve ever seen. The hardware and software design makes it something that you want to play with. I rarely get excited about messing with my RAID. It makes it easy to protect against losing data due to hard drive failure, it’s less expensive than a RAID of similar size and its incredibly easy and fun to use.