Windows 7 is a faster Vista 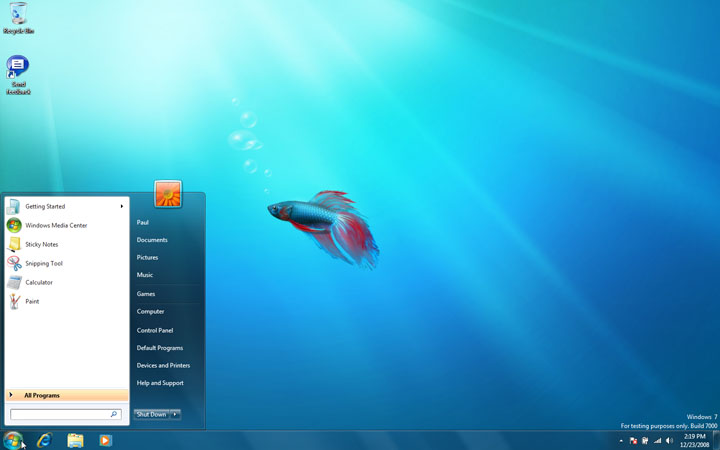 We got our hands on a copy of the public beta of Microsoft Windows 7, the planned successor to Windows Vista. From what we can see so far, it’s very fast on our test system, though we haven’t tested it with graphics drivers since our old video card isn’t supported.

Hardware support is an issue for Windows 7, at least as it was an issue with Vista. Windows 7 is based on Vista, so the odds are if a product wasn’t supported by Vista, it won’t be supported by Windows 7. For modern hardware made in the last few years, that limitation shouldn’t be a problem. Indeed, Windows 7 actually includes much better support for touch interfaces and multiple core processors than did Vista.

The interface is a further departure from XP than was Vista. An enhancement to Aero, the visual effects that made Vista beautiful, called Peek now allows a user to quickly make all the windows transparent to see the desktop. The widgets that were for the resource-hogging and now-gone sidebar can now be used directly on the desktop, so Peek could be used to quickly see news and IM widgets while not having to minimize the spreadsheet. The task bar at the bottom has been merged with the Quick Launch toolbar, so now each of the shortcuts becomes a menu for the like-kind windows and programs that you have open. We never liked the Quick Launch bar, nor the grouping of windows, so it will be interesting to see if this change is actually an improvement.

We’re certainly glad there will be no more Sidebar. Windows Mail, Windows Calendar, Windows Photo Gallery and Windows Movie Maker will also be gone, replaced with Windows Live Essentials, which will pretty much do the same things but with an emphasis on the cloud.

The new version of Windows Media Center has a few more options and ways to view items, but doesn’t seem like a large update. The final version of Internet Explorer 8, a beta of which is available for download and testing for XP and Vista now, will be shipping with Windows 7 and features better web standards compliance by default. The compliance isn’t perfect like that of Opera 10, but it’s better and the only side effect is that it will not display most websites properly.

Homegroups will make setting up a network easier, though we’re looking forward to seeing if they make it more secure. From what we saw of the randomly generated password we were shown on installation, it seems this may be the case.

Windows 7 does allegedly support faster startup and shutdown times, as well as longer battery life. There is a planned version for netbooks, which means Microsoft will finally be able to retire [read: bury] the aged XP.

Windows Vista is currently the exiled ruler of Microsoft’s operating systems. Sure, it’s smarter and more experienced and would bring world peace were it in office, but some pretty powerful rabble-rousers have kicked it out of the kingdom and replaced it with the old leader, XP. While the silent majority of computer users are happy with Vista, the vocal minority of either XP-lovers or change-haters has caused Microsoft to push out a new operating system sooner than it should have. Microsoft was working on a new file system called WinFS for Windows Vista that never made it, and now it looks like it won’t be included in Windows 7 either. Right now, Linux’s Compiz-Fusion is king of slick-looking, fast-acting and productivity-enhancing desktop visual effects, and while Microsoft could have made some serious headway to catch up, they were forced to plan a release of a half-baked operating system update rather than a full-fledged upgrade that could have solidified their dominance on the desktop.

The verdict? We’re going to continue to use Ubuntu Linux, while we recommend Vista and Windows 7 to our families and coworkers who are used to Microsoft operating systems and don’t want to learn new tricks. We’re going to continue to ridicule those who claim Vista is bad and XP is better, though we’ll continue to use XP on systems that came with it since neither Vista nor Windows 7 is or will be better enough to justify spending money to upgrade the operating system.

Want to try Windows 7 for yourself? The download restrictions for the public beta have been lifted so anyone can try it. All you have to do is download it from the Microsoft Windows 7 website. If you disagree with our review, let us know in the comments.