Publications shouldn’t try to be auctioneers

There is a disturbing trend in the auction industry. The availability and ease of installation of inexpensive or open source scripts that turn any website into an auction site [read: eBay clone] have convinced some trade publications and newspapers to try to be auctioneers. Newspapers and trade journals who try to be auctioneers by adding auction scripts to their websites do a disservice to their subscribers, the auction industry and – most egregiously – their sellers.

Subscribers
Sandhills Publishing has recently added an “Online Auction Listings” section to its websites at www.machinerytrader.com, www.tractorhouse.com, www.truckpaper.com and www.controller.com. It has disallowed auctioneers who list items at Internet only auction from advertising in their publications and on these websites. This choice to become its own exclusive auctioneer for equipment at Internet only auction means its publications are less valuable to its subscribers who can no longer see the wide range of equipment available from many auction companies. Instead, the subscribers only see equipment listed for live auction and equipment listed directly by sellers on these websites for Internet only auction. This creation of a monoculture means that prospective buyers will increasingly turn to other venues for more comprehensive lists of available assets, reducing the value of advertising sale listings and traditional auctions in these publications.

Auction industry
What makes matters worse is that in addition to the reduction in value to the subscribers, Sandhills is playing the eBay game of calling itself an auctioneer and claiming that it doesn’t get involved in the transactions. The obvious question is, “who does it hurt?” – indeed, eBay has been around for a long time and has offered the ability for sellers to directly post items for sale. The problem is that the “Online Auction Listings” system does a disservice to auctioneers and the auction industry. 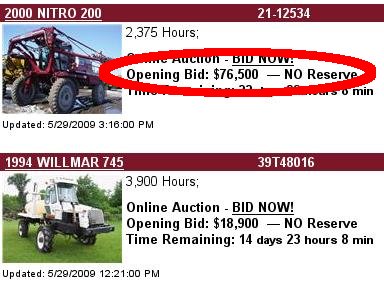 TractorHouse completely misses the definition of no reserve

Notice the image to the right, taken from tractorhouse.com. The system completely botches the concept of a no reserve auction by listing an opening bid price. This is an intellectually dishonest practice, since an auction with a significant required opening bid is by definition an auction with reserve. This misunderstanding of auction concepts causes confusion for sellers trying to decide how to liquidate assets and it makes it harder for auctioneers to educate the public that an auction can have either an opening bid or no reserve but never both. Will McLemore from McLemore Auction Company doubts that such systems are sustainable.

“Ultimately it will come down to who is able to conduct auctions with attractive and consistent terms on a regular basis. I highly doubt that any publication will be willing or able to book unreserved auction business online. It does concern me because their ineptitude will inevitably muddy the waters for those of us who understand what we are doing.”

Sellers
This kind of system is an easy sell. A seller who subscribes to the publication has the perception that the it’s local and has the bidders – solely in the other subscribers – who may be interested in the asset. The logic failure goes something like “I subscribe to this publication so everyone else interested in my assets must do the same.” This seller is perhaps one who may have sold the item with a real auctioneer and had access to a professional marketing campaign that included more than one publication and one website. Instead, he is led to believe he’s using the auction method of marketing when he’s doing nothing more than listing his item with a price in the classifieds.

Any auctioneer knows that he is an agent of the seller and has the specific duty to work in the seller’s best interests before, during and after the auction. The position taken by Sandhills is the same as eBay’s. They claim to not be involved in the transaction but merely to allow sellers and buyers to find each other. This hands-off approach can be a dangerous situation for a seller who, especially when dealing with assets of high value, should have professional services of an auctioneer at his disposal.

Diversity
It’s not just Sandhills Publishing. Other publications such as the Nashville Tennessean and Kansas City Star have at least kicked around the idea of building auction sections on their websites, and it’s inevitable that in a time of rapidly declining subscriptions, companies originally rooted in traditional publications will look to diversify into other arenas and undoubtedly step on some toes in the process. Carl Carter, president of Auction Communications and blogger at www.overcoffeemedia.com is closely following the plight of traditional media.

The crisis facing media — including newspapers, consumer magazines and trade media — is so enormous and so pervasive that some will inevitably be tempted to venture into new lines of business, including auctions. But these companies need to realize that their organizations are built around a totally different business model. The pitfalls are wide and deep, ranging from ill-fitted cost structures to potential conflict of interest.

An increase in diversification is a reduction in focus. We think companies should be auction companies or they should be something else. An attempt to diversify into the auction business by media companies does a disservice to their subscribers, the auction industry and their sellers.

Do you know of other publications who have tried to enter the auction arena? Let us know in the comments.

This entry was posted in services, community. Bookmark the permalink.