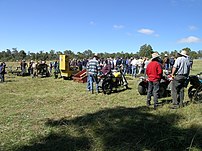 Hello and welcome to the seventeenth episode of the AuctioneerTech Auction Podcast, my name is Aaron Traffas. In this episode, we’re going to discuss starting bids for Internet bidding and why you shouldn’t ever start the bid above your lowest acceptable bid at a live auction. This is a common practice, so I encourage your feedback and discussion of this possibly controversial issue.

Most bid callers in the act of selling an item begin by asking the crowd for a bid at a price that is higher than or equal to the projected sales price. When they don’t receive a bid, and they rarely do at this initially requested price, they reduce the price until someone makes an initial bid. The price goes up from that point until nobody else bids, at which time the auctioneer declares the item to be sold.

Most bid callers have a low bid below which they won’t ask for another bid. This price is usually between $1 and $25 for personal property, depending on the auctioneer and the type of property in the auction. It’s in noone’s best interests to cry for bids below such a threshold, and in the case of items without pre-auction bids, the auctioneer has the option to put an item without bids together with another item without bids in an effort to sell the items.

Most, if not all, Internet bidding platforms allow the auctioneer to specify a starting bid price. When the item is first listed, no bids below this starting price are allowed.

In the case of a successful Internet bidding system, few, if any, items in an event should start without pre-auction bids. The only way to achieve such a system is to ensure that the starting bid is equal to the lowest bid the bid caller will take at the live auction. Why would an auctioneer want to set a start price that was anything other than the lowest bid he would accept?

If your minimum bid at a live auction is $10, set the minimum bid for the Internet bidding to be $10. For every item. For every category from coins to real estate. For every auction. Every time.

Low starting bids encourage participation. They encourage speculation. Bids are placed by bidders who realize that an item is well under-valued and who have no intention of purchasing an item, only to perhaps do further research and maybe bid again when they get the email hours or days later that they’ve been outbid.

What does setting consistent and low initial starting bids hurt? Absolutely nothing. The auctioneer gets more bids, and if those bids aren’t significant in relation to the value of an item, the crowd will initiate the bidding just as if there were no Internet bids and nothing is lost. Bidders who started bidding at $10 on the John Deere combine may bid again at $100 and $1000 and tell the story to their neighbors who may bid at $10,000 and then again at $50,000. All of a sudden the $100,000 combine finally sells after 30 different bidders have placed bids. The huge increase in speculative bidding means more participants who get outbid notifications and come back to the website. Website traffic goes up and as the visibility increases, excitement about the event goes up.

What do arbitrary or varying initial starting bids hurt? They look like reserves, even if they aren’t. It’s much harder to convince a seller to sell an item absolute – which means with no minimum or reserve – if items without any bids require certain prices in existing listings. Fewer bids are received and the chances increase that an item won’t have a starting Internet bid when it is sold at the auction. The lack of consistency lends further credence to some customers’ mistrust of auctioneers. The combine with 30 different bidders in the above example only receives bids from five people willing to bid from $50,000 to the selling price of $100,000. Fewer stories are told and less excitement is created.

Take another example of an item with an expected sales price of $100. An auctioneer with a rule of thumb to set the starting bids to 60% of expected sales price sets the start bid to $60. A prospective bidder who would have bid up to $50 sees the item but can’t bid on it. No bids are received and at the live crowd the item sells for $40. While an argument can be made that the auctioneer should have made a better prediction, we say that the auctioneer should be in the business of finding value and not predicting it.

Auctioneers with varying starting Internet bids in an event are trying to add complexity where there should be simplicity. Why spend time figuring a starting bid of a percentage of the expected selling price when it’s advantageous to set every item at $10 and encourage more participation from more bidders? Even if bidders aren’t serious, it hurts nothing to enlist their help spreading word of an event to others who may be serious.

That’s it for episode 17. Do you set arbitrary or varying starting bids? Why? Let us know in the comments. We have some exciting guests coming up over the next couple of months before Conference and Show, including Tom Clark from Proxibid; Walt Kolenda, also known as AuctionWally; Steve VanEerden from JBS Software; and NAA President Randy Wells.

Thank you for listening, now go sell something.