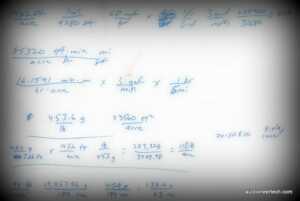 How’s that for a click-bait title? As many of you know, I farm during the summer and fall and work in the auction industry during the balance of the year. As I was doing the math this summer for seeding rates and fertilizer application rates, I noticed some parallels between converting gallons per minute to gallons per acre and deciding what changes to make when going from an in-person auction firm to one that implements Internet bidding.

We learn in algebra that we can convert one value to another by using a unit multiplier. If I want to convert 5 miles per hour to feet per second, I have to multiply 5 miles/hour by 1hour/60min by 1min/60sec by 5280ft/mile.

We can cancel one unit in the numerator with the matching unit in the denominator, leaving us with (5 x 5280) / (60 x 60) = 7.33 ft / second. We use minutes in our math, but we don’t have minutes in the original problem or the solution because they cancel out.

When auctioneers begin to consider implementing Internet bidding in their auctions, many wonder about changes they’ll have to make in their business model, advertising methods and data management processes. Changing a variable as important as the way bids are collected in an auction must mean fundamental shifts to many other parts of the business.

In fact, nothing should change as a result of taking Internet bids. Advertising should always be based on the asset type and the appropriate demographic, not the way in which bidders are expected to participate. Data management processes for a good in-person auction marketer should already be based on taking pictures of individual items and listing them separately. The business model of a professional auction firm is no more tied to bid calling than my farm is tied to which crops I produce or which equipment I use to do it. If changes must be made to advertising, data management or a business model due to changing the way bids are accepted at an event, something more fundamental is wrong in the operation that won’t be fixed by flipping the Internet bidding switch.

I’ve found that bidding type doesn’t actually matter much to the rest of the operation. If the auction business were a long equation, bidding method would cancel out. Internet bidding is like the minutes used in our algebra example. We need it to get the desired result, but it’s not something that we use when identifying the problem nor do we expect it to be present in the solution of a successful event.