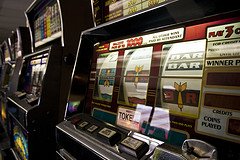 Frequently, I see ads on this site through Google’s Adsense that advertise penny auction websites. In a common penny auction format, each bid increments an item’s bid price by one cent. Each bid costs a quarter. Each bid extends the timer and the last person to bid wins.

It’s tough to judge the reputability of these penny auction sites, since the barrier to entry is very low. Unlike Internet auction sites run by auctioneers, it’s unlikely that there is an auctioneer of any kind behind any of the many sites that use this model. In fact, there have been recent news stories regarding automated shill bidding by some popular penny auction sites.

This entry was posted in theory and tagged Mike Brandly, penny auction, gambling. Bookmark the permalink.