Synergy uses one keyboard and mouse for multiple computers, displays

I use several computers simultaneously during day-to-day operation. While it’s easy to connect multiple displays to one computer, the ability to use the best features of Windows XP, Windows Vista and Linux simultaneously is much more valuable than having additional screen area, or real estate, on one operating system.

While it’s possible, and certainly easier, to use a hardware KVM switch, that method defeats the value of having more screen real estate. You’re also relegated to having to hit a button to switch from one computer to another. 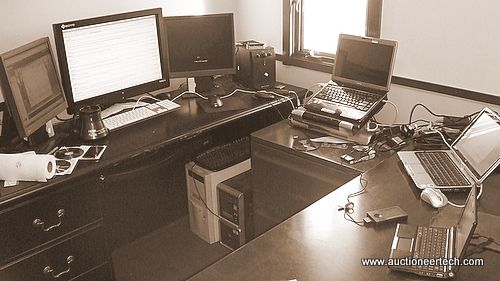 Synergy comes in versions for Windows, Linux and Mac. My main computer is Linux, but there are still some programs such as Outlook and Zune that simply won’t run – without destructive hacking – on Linux. Synergy lets me simply drag my mouse from Linux to Windows to check my corporate email. I sometimes take my notebook home with me, so I have a fair amount of files on it. When I plug in my external monitor and launch Synergy, my notebook’s Vista OS becomes just another extension of my primary desktop.

Synergy does have some issues. While it’s crazy-easy to configure on Linux using the QuickSynergy configuration utility, the Windows version isn’t quite as intuitive. You have to specify exactly which computer is right and left of each display, but once it’s configured you don’t have to mess with it again.

Synergy can be configured to automatically start, and it’s easy on XP. Vista’s security enhancements pose some additional recommendations when running in that operating system. I start Synergy as administrator, but it still requires that you manually confirm the running of any administrative-level task by using the keyboard or mouse directly connected to the computer, so I simply reach over and hit alt+c or alt+a on my notebook’s keyboard to either confirm or allow the action requested. So long as Synergy is running as an administrator, it will let you use your main mouse and keyboard to proceed using that administrative task once it’s been authorized.

Lastly, I found that Synergy has trouble with Opera on Ubuntu 8.10, Hardy Heron. It may be a problem with Opera on all versions of Linux, but I haven’t found much information about any other versions. I’m looking for a way to synchronize my saved browser favorites among multiple operating systems. Mozilla Weave doesn’t support 64-bit Linux yet, and I really don’t want to mess with Foxmarks because I’d love to get away from Firefox. Last week I tried to switch to Opera, finding that it not only ran on all the operating systems I use but also facilitated browser settings synchronization through My Opera. Everything went well until my Synergy started crashing. It would simply stop working. It’s a very confining feeling when your mouse suddenly is confined to one monitor. I found little information regarding Linux, Opera and Synergy, so I’ve stopped using Opera temporarily until they fix the bug in either Opera or the next version of Ubuntu, Intrepid Ibex, the release schedule for which puts its release at the end this month.

Since I don’t have the ability to test or use Synergy with Mac, I have no experience in that regard. However, since Synergy hasn’t been updated since 2006 I’m going to assume that the stability on Mac is similar to Linux and Windows.