We discussed back in September how Internet bidding has been referred to as eBay style or static bidding, and we’ve explained why those are bad descriptions for this type of bidding. Features like automatic extension and staggered ending make most modern Internet only auctions nothing like eBay and they certainly are exciting and dynamic enough to not come close to deserving to be called static. Now, a new twist has been released by Purple Wave, an auctioneer based in Manhattan, Kansas. This twist is grouped extension. Here’s the explanation from Purple Wave’s website.

“We continually look for ways to try to translate traditional auction concepts into the Internet auction world,” said Jerrod Westfahl, Purple Wave’s Executive Vice President of Business Affairs. “Our grouped extension feature does just that. It’s really all about creating aggressive bidding activity without creating unnecessary risk to the bidders. This feature is a win for both buyers and sellers. Buyers don’t miss out on what might be an otherwise good value. It allows auctioneers to add value for sellers by exercising their professional judgment in deciding how to create the groups.”

This new feature allows the Internet only auction to more closely replicate a choice sale at a live auction. When items are sold as a choice at a traditional auction, the winning bidder gets to select among a group of items at the winning bid price, taking one or multiple items with each item costing the high bid price. The auctioneer then sells the remaining items to other bidders, usually in the same way. While it’s true that some real-time Internet bidding platforms have options to facilitate choice sales, we don’t know of any companies outside of Purple Wave that yet facilitate choice bidding for Internet only events. 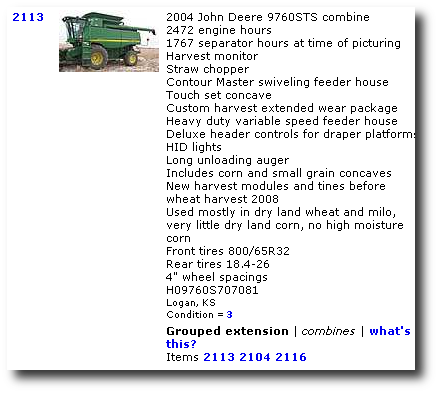 Take for example the equipment auction for which Purple Wave will be unveiling the new grouped extension feature. There are three 2004 John Deere combines. Let’s suppose for this example that there may be one that is more desirable than the others. Let’s take the example of a traditional Internet only auction where the one with the best current bid is listed first and the other two are listed directly after it in descending order of current bid. As the bidding begins to end, more bidders are bidding on the first item, the one for this example we’ve assumed is more desirable. This bidding activity causes the item to extend for a greater period of time than the two items following it. When the second-highest bidder realizes that he cannot afford to bid again on the first item and decides to try to bid on one of the other similar items, he cannot place more bids because the other items have closed at lower prices than he was willing to pay. Since he wasn’t willing to pay those prices on the other items until he was absolutely sure he wasn’t able to purchase the first item, he was unable to purchase any combine at the auction.

With grouped extension, any item in a group receiving a bid in the last few minutes will keep all of the items in the group from closing for a period of time. This new method solves the problem above by allowing the second-highest bidder on the first item to bid strongly on that item while knowing that he has the option to bid on either of the other two items should the price on his preferred item exceed that amount which he is willing to pay.

This grouped extension system is an interesting twist on the way items are offered at Internet only auctions. Do you know of another company who offers this kind of service? What are some other twists on Internet only auctions that haven’t yet been discussed here? Let us know in the comments.

As a matter of disclosure, Purple Wave is this author‘s employer and this author was directly involved in the development of this new tool.