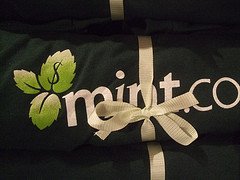 We’re QuickBooks fans. That is to say once a year, usually after the first or second extension on taxes, we spend a day or two entering all the checks and deposits from the entire previous year. About six months ago, we stumbled onto a service called Mint. Having used it religiously since that time, we can safely say that Mint is perhaps the coolest thing to happen to finance since QuickBooks ended double-entry accounting for consumers.

Mint was the winner of last year’s TechCrunch 40, a contest among startup technology companies. The concept is that you provide it with the credentials to login to your checking accounts, credit cards, Paypal – even student loans and investments. It then aggregates all the information together and provides you with your spending habits and ways to save money. They’re adding more banks all the time, and they’ve just released an iPhone application that makes it easy to check all your balances when you’re on the go. You can even get account balances by sending an SMS message of “bal” or “balance” to 696468 to get a text message back with the current balance as of the last time Mint polled your accounts.

Mint makes money by suggesting ways to save you money. If there is a credit card that offers a better rate based on your spending habits, Mint will suggest that card to you and show you how much money you could save over the course of a year by using that card instead of your current card.

The way Mint uses your credentials will certainly make the more privacy-conscious among us think twice before using it. We here at AuctioneerTech can say with experience, however, that the benefits of using it vastly outweigh the alternative of checking each of many different account balances and manually doing the research to see which financial deals are the best.

Do you use Mint? Do you use a Mint alternative such as Yodlee, Wesabe or Quicken Online? Let us know in the comments.