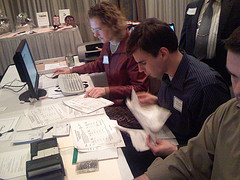 Hello and welcome to the thirteenth episode of the AuctioneerTech Auction Podcast, my name is Aaron Traffas. In this episode, we’re going to discuss Internet and absentee bids, agency, fiduciary obligations, and how best to represent the client when accepting absentee bids. I’ve witnessed several heated discussions among auctioneers concerning the various aspects of this speciously complicated issue. I intend to show that the only way to consistently obtain higher prices for all an auctioneer’s sellers is to execute absentee bids competitively.

For a traditional auction, the relationships and roles are black and white. The auctioneer, acting as an agent of the seller, finds the highest and best sales price available from the bidder pool in front of him and executes a transaction between the highest bidder and the seller at that price.

When a bid is executed directly, the auctioneer immediately begins the bidding at that price. Similar to a hand being raised at an auction, the bid is implemented one time only and the auctioneer doesn’t have knowledge of the bidders possible intent to bid more. This method offers little if any departure from the example described earlier where the auctioneer simply accepts bids from bidders and maintains his position as exclusively an agent of the seller.

The second way that bids can be implemented is by competitive execution. With competitive execution, an absentee bid is treated as a maximum bid with the assumption that the auctioneer will bid only as much as necessary for the bidder to win the bid up to but not exceeding that maximum bid. In this case, the auctioneer must actually make decisions on behalf of the bidder. For the auctioneer – and remember we’re including all staff and associates of the auction firm – to act on behalf of both a bidder and a seller at the same time results in a condition of dual agency.

Dual agency can be a bad for an auctioneer, as an absentee bid executed competitively could result in a sales price less than that maximum absentee bid. A seller could correctly argue that the auctioneer failed to satisfy his fiduciary obligation to her because he had information that a bidder was willing to pay more than the final sales price of the transaction. In many, if not all cases, the law is on the seller’s side in this case.

So if dual agency is bad, why wouldn’t an auctioneer simply execute absentee bids directly to avoid assuming that position? Many do. The downside to the practice of direct execution is that it discourages bidding. A bidder doesn’t want to pay any more than necessary for an item. If an auctioneer’s policy is to directly execute the bids, the bidder has an incentive to bid as low as possible because he doesn’t want to risk paying any more than necessary to win an item.

If an auctioneer’s policy is to execute bids competitively, a bidder no longer has an incentive to bid low. A bidder can bid higher, resting assured that the auctioneer will bid just enough to win the item, just as the bidder would do were he at the auction himself.

Within the scope of one item for one seller, the choice is clear and the auctioneer has the obligation to obtain the highest price possible. Suppose, however, that the seller has 10 items. A competitive bidding policy encourages several absentee bids to be placed on each item. While some of the items may sell for less than the maximum bids, the aggregate sum of all the items is more because of the increased bidding activity. When the scope is expanded beyond one item for one seller to include all the items from one or more sellers in an auction, it is clear that competitive bidding encourages participation and more, higher absentee bids, eventually resulting in a higher aggregate sales price for the seller.

What about the legal argument? It is important to precisely define how the bids will be executed in both the contract with the seller and on the absentee bid form or website terms in the case of Internet bids. With proper disclosure, the legal issues regarding dual agency are negated. Any reasonable seller will understand that the increased bidding activity generated by a competitive execution of absentee bids will result in higher prices, even if there is a possibility that the item will sell for less than the maximum bid.

That’s it for episode 13. I hope I’ve successfully made the case that only by also serving the interests of the buyers can the interests of the seller best be served. If you disagree with me, as I’m sure several if not many auctioneers will, please leave a comment or feedback on the website.

You’ve been listening to the Auction Podcast from AuctioneerTech. If you have suggestions, questions or comments, or are interested in being a guest, please let me know by going to https://auctioneertech.com/feedback and leaving a message. You can also post public comments about this or any other episode, as well as find show transcripts, on the auction podcast page of auctioneertech.com.