After the Auctioneer Crosswalk video call last month, I received a question about the hardware I use to record podcasts. I spend a fair amount of time each month recording commercials, as well as Purple Wave’s Auction Podcast, so I’ve done a fair amount of research, mostly through trial and error, about the best way to setup a home studio without breaking the bank. While I’m always looking for ways to improve, here’s a look at the hardware I’m currently using and why. 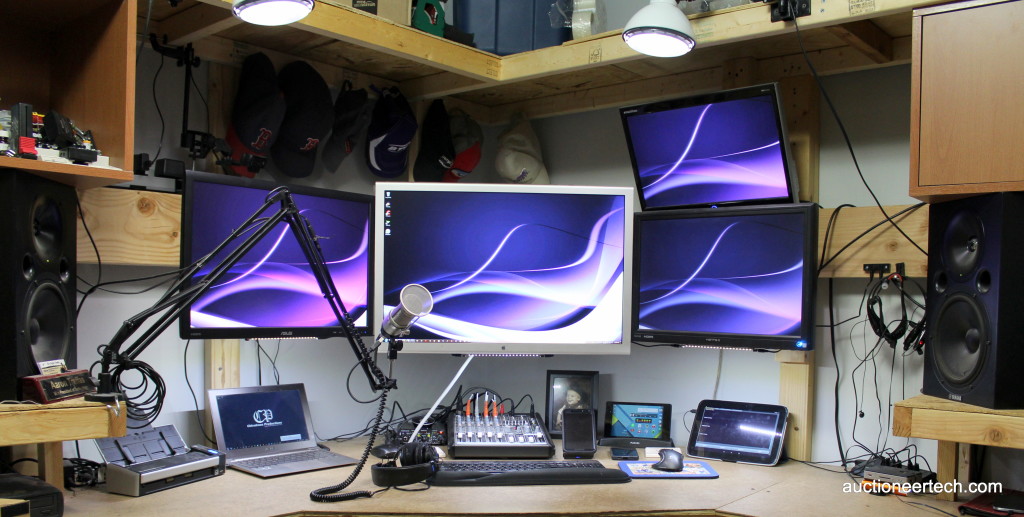 Overview
The goal of any audio recording is low noise and high control. The software is outside the scope of this article, but the requirements of the hardware are to record separate sources at the highest quality and lowest noise possible. When recording a commercial or a podcast without a guest, one computer is sufficient. I’ve found, however, that when recording a call, making the call and recording the call from the same computer is tricky. For that reason, I always use a laptop to run Skype or, now that Skype no longer works well, Google Hangouts, and I connect it to the desktop computer that will be recording the caller and my voice separately.

Microphone
The first thing every auctioneer is going to ask about is the microphone. When I first started recording the AuctioneerTech Auction Podcast in 2008, I used an ART USB Dual Pre and a Shure SM57 microphone. The SM57 has a much more favorable frequency response than the more popular SM58, and the Dual Pre let me record two sources separately.

The Dual Pre worked great under Linux, which is what I used to record at the time, but as I moved away from Linux I found that using the Dual Pre under Windows introduced a significant amount of noise. I decided to try to simplify my setup, so I ordered a Samson G-Track, which has a built-in USB interface. It worked well under Windows, and I used it for several years. It had a line-in that let me record and monitor the sources separately from the mic itself, which made it a better choice for recording calls than other USB mics. It’s still the USB mic I’d recommend to anyone looking to find a decent quality and simple podcast recording setup as cheap as possible.

While the G-Track worked, it was still a consumer USB mic. The noise floor was better than the Dual Pre, but it still wasn’t as low as I wanted. I wanted a professional, large diaphragm dynamic microphone. I found the Heil PR40 and I love it. There are definitely better microphones, but the PR40 strikes a balance of extreme quality, great sound and a still somewhat reasonable price. If you’re lucky enough to have your own desk, splurge for a swing arm – you won’t regret it. 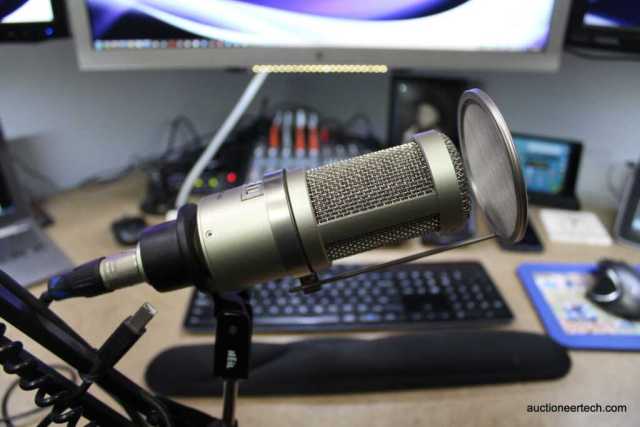 Console
The PR40 is not a USB mic. It has an XLR output, which means I need a recording interface. I’ve always used a console to control the sound around my desk, and I decided it was time to ditch my rickety old board and get a new one that had a USB interface built in. I initially tried a Behringer XENYX X1204USB. It simply didn’t work the way I wanted it to work. It would record just fine, but there wasn’t an easy way to use headphones and my speakers simultaneously. After being frustrated with the Behringer for months, I broke down and traded for a Mackie ProFX8. It’s the perfect console. The USB interface works great and features a ridiculously low noise floor. The inputs and outputs make sense, and I can use headphones, speakers or both and effortlessly switch between the two. 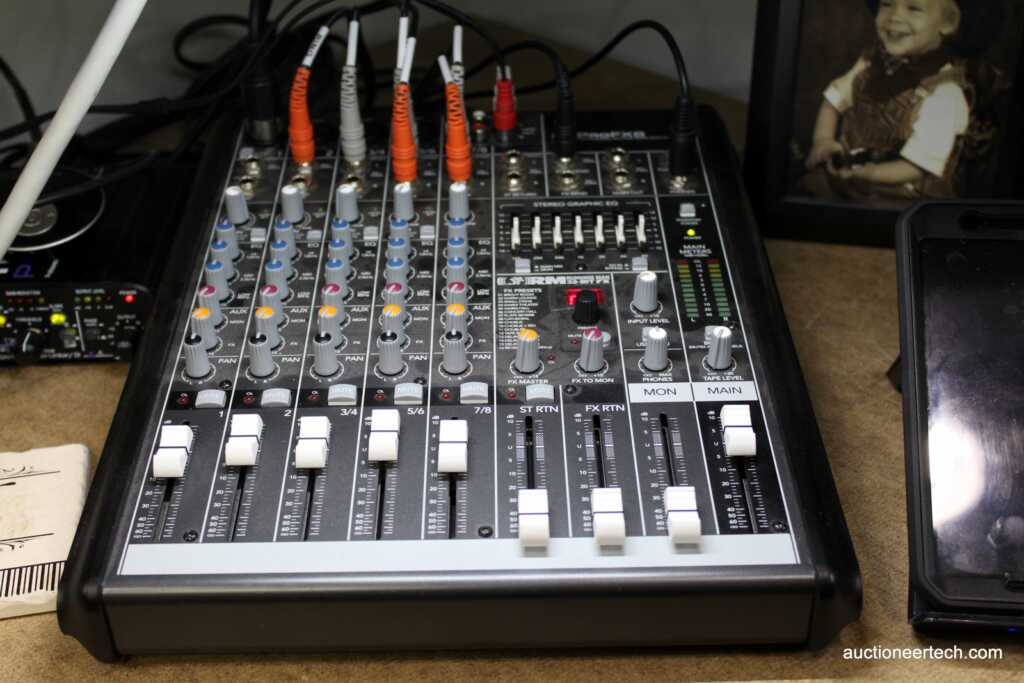 Preamp
While the PR40 works fine running directly into the ProFX8, the output of the PR40 is low enough to justify a preamp. I found a budget preamp, that also has a compressor, in the ART TubeMP/C. A compressor is an audio circuit that reduces the dynamic range of a signal. It’s used, for example, to prevent equipment or hearing damage caused by auctioneers who yell into the microphone by automatically reducing the volume of loud sources while not reducing the volume of normal sources. I don’t use the compressor when I’m recording podcasts, as I prefer to apply compression with software, but it’s going to be very valuable when I stream auctioneer contests at state association conventions. 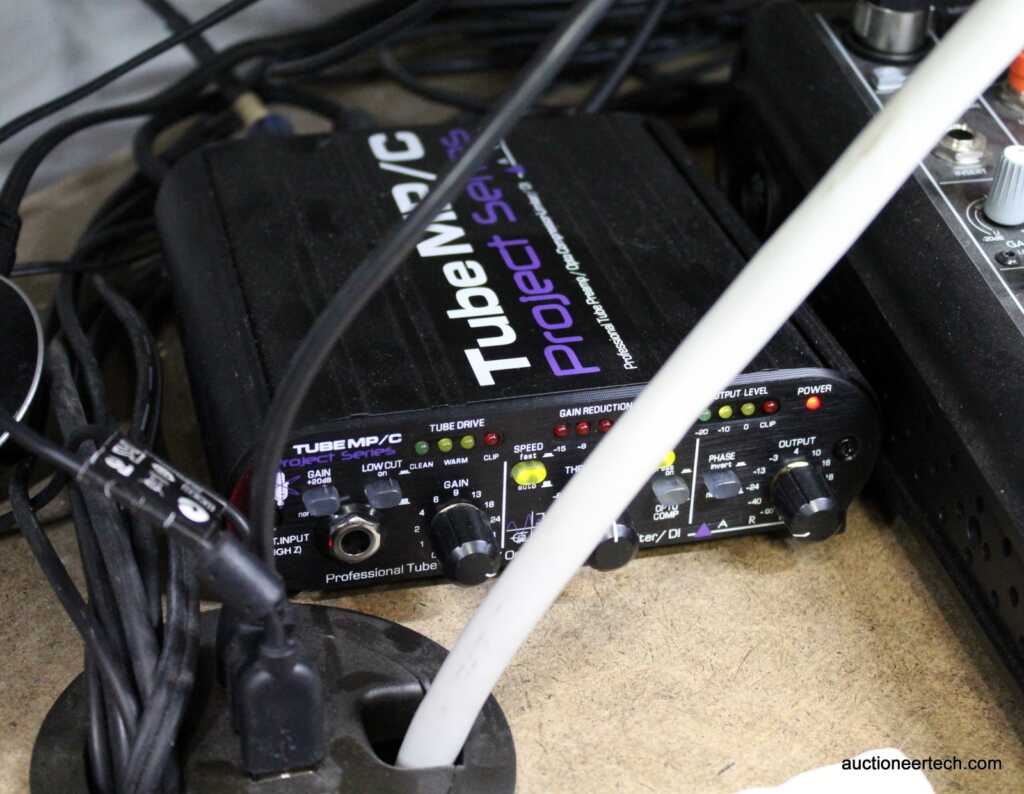 Headphones
Headphones are crucial to any recording, and even just for a computer call or conference. I’ve sat through a hundred calls that are ruined by the echo caused by someone who doesn’t know better or who thinks he’s to cool to need headphones. For normal commercials and podcasts, I like the Sony MDR-7506 reference cans that I’ve had since college. They’re comfortable and easy to take on and off. When video is involved, however, you don’t want to be the dork that looks like he’s in a sound booth at a radio station. Any set of noise-cancelling in-ear monitors will work, but I like the Westone UM Pro10 for their balance of comfort, sound quality and price. I’ve tried both Shure in-ears and generics on stage in the Aaron Traffas Band, and the Westone are definitely my favorite. However, if the $150 price tag isn’t in the budget, the MEElectronics M6 are an attractive alternative that’s nearly as comfortable.

Video
Any off-the-shelf USB webcam will work for podcasting and video calls. Look for anything that’s widescreen 1080p for the best quality. I have the Logitech HD Pro Webcam C920. More important than the choice of webcam is the placement of lights. It’s crucial to light yourself well from the direction of the camera. As you can see in the picture below, the camera is above the monitor on the left. I have two lights on swing arms that can be easily positioned between the camera and me whenever I turn on my webcam. 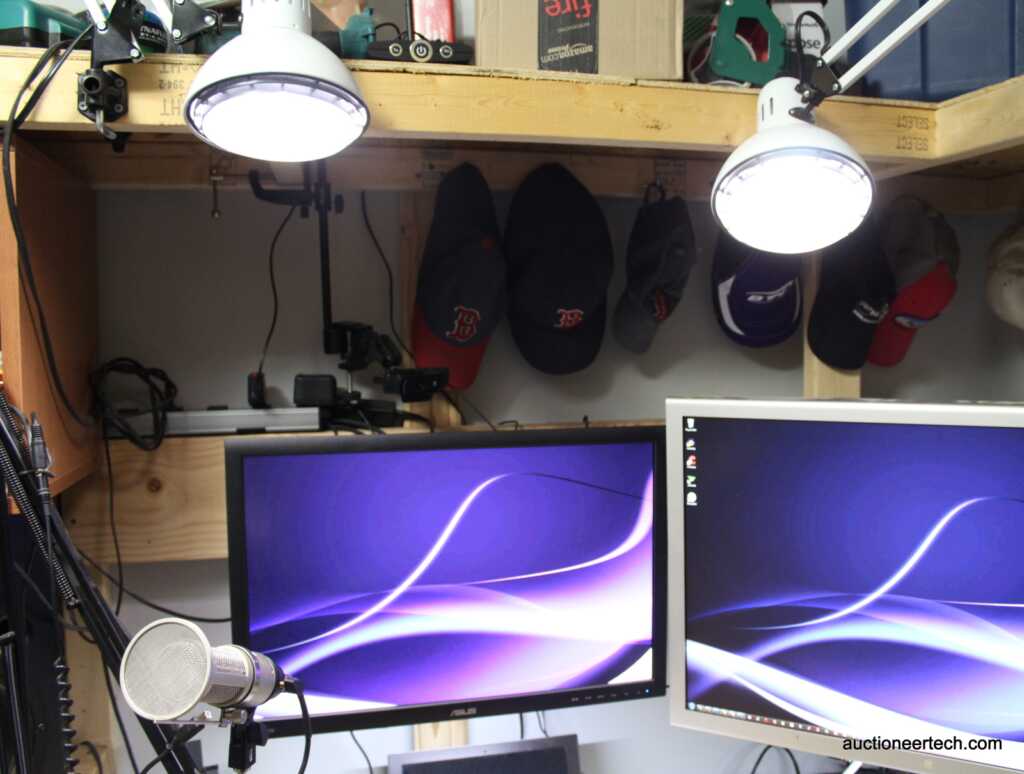 Software
I’m not going to get too deep in software, as there are a ton of different options. I like Cakewalk Sonar X3, as that’s what I’m used to using to record music. Audacity is a free and open source tool that I’ve also used in the past. The point isn’t that a specific software is better, but that whatever software you use, make sure to record each source separately. Separate tracks allow compression and equalization and other effects to be applied appropriately.

There is no right way, but this is my way. Do you have a better way or a suggestion for improving my setup? Please let me know in the comments.