Speccy tells you what your computer has in it 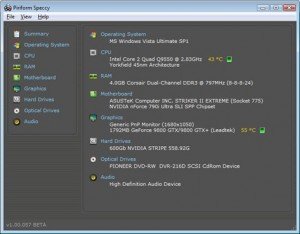 Speccy tells you what's under the hood - image via piriform.com/speccy

Frequently, in the act of diagnosing computer problems or deciding which parts to order for upgrades, we find ourselves wanting to know about the hardware components inside a computer. A new program aims to make it easy to know as much as possible about the innards of your machine.

Speccy is a product from Piriform, the makers of CCleaner and Defraggler, and is currently in public beta. Here’s their product description from their website.

What’s in your computer?  If you’re like most of us, you can probably name the processor (Intel or AMD, Celeron or Pentium), maybe how much RAM it has, and maybe how big the hard drive is.

When you go to a computer store and see all the bright shiny PCs laid out next to each other, most will have tags or stickers indicating the:

Two or three years later, when it comes time to upgrade your computer, that tag or sticker may be long gone. Speccy was designed as a free electronic “what’s inside” sticker for your PC.

We’ve found that, while the basic information is available from Windows Device Manager, Speccy goes above and beyond by providing crucial details that Windows doesn’t. For example, Speccy will provide the clock speed of the memory installed, allowing you to know exactly what kind of memory upgrade to purchase. Speccy gives you the exact model of the motherboard so you can find correct and current hardware drivers.

It’s important to remember that Speccy won’t be able to report on anything that isn’t provided to the operating system by the hardware. For the computers we’ve tested, it provides an exact temperature of the CPU but not the graphics card, since not all graphics cards report their temperature. Also, since the motherboard doesn’t provide the name of the audio chipset to Windows, it can only tell us that the sound card is a “high definition audio device”.

If you want a quick way to tell what’s under the hood without popping the case, or need to know the temperature of your processor, Speccy is a fast and small utility that stays out of your way until you need it.

This entry was posted in software and tagged hardware, Piriform, Speccy. Bookmark the permalink.