theAuctioneerchannel.com to provide video of live auctions and more 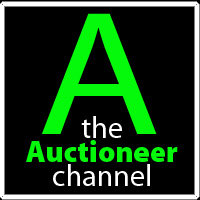 We’ve had our eye on recently-launched website theAuctioneerchannel.com for the last several days. A joint venture between Michigan auctioneers Scott Vander Kolk, Jr., and David Helmer, the site aims to promote the live auction industry through videos and blogs.

We caught up with Scott Vander Kolk and shot him a few, quick question.

It’s a couple different things, really. It’s the culmination of hundreds of late-into-the-night phone calls between David and me. It’s also a place to watch how good other auctioneers are. But the core purpose of the theAuctionchannel.com is intended to be ground zero for all information related to the auction industry, a collection point for video, perspectives, information, articles, instructions, etc. Our contributor and friend Peter Gehres wrote a blog for our launch, titled “What is theAuctioneerchannel?” He said, “it is what we make of it.” I think he’s right on the money. If we can get our fellow auctioneers behind us by simply uploading some content, we can package our industry in a dynamic manner that will draw enormous interest and introduce ourselves to a larger audience.

When and why did you decide to build it?

When: I can’t say exactly for sure when the idea was initially thought of, according to YouTube I’ve had an account since Feb. of 2007. It was around then when we started talking about. In October of 2007 we put a video up with the logo in the introduction. We have been working on it ever since.  Why: At first just because we thought it would cool to have all auction videos in one place, but as ideas evolved we realized this could have enormous potential.

Who is the expected audience and what is your plan to promote the site to that audience?

That’d be you, your dad, your grandma, that dude with the funny eye that comes to every auction and doesnt buy anything – in short, I guess everybody, with a special hope that everybody includes lawyers, bankers, estate execs, auctiongoers, and potential auctiongoers. I suppose that is a little broad. Out-of-the-box we’d like the auctioneers and their faithful customers to start with and branch out from there.

What are the plans for the original programming?

We have some programming in the pipeline right now. We are shooting for a mix of informational and educational programming as our base and also some just plain entertaining stuff! Beyond the committments we have for shows we will probably be putting out a casting call sometime shortly for show ideas and individuals.

Other players in this area include the Auction Network and the National Auction Broadcast Network. The piece that makes theAuctioneerchannel different is that there doesn’t seem to be corporate involvement. Because it’s created by auctioneers and uses content sourced from the community – coupled with the fact that uploading that content is free to the users – it has a better chance of being widely adopted by auctioneers. The challenge will be expanding the audience outside of auctioneers, and only time will tell how attractive the site will become to non-auctioneer consumers.

All in all, our initial impression of the concept and direction it’s taking is quite favorable. The model will be very attractive to auctioneers, the creaters and writing staff are loyal to the industry and the auction method of marketing, and the site is simple and easy to navigate. theAuctioneerchannel.com looks like it could be a great public relations tool for the live auction industry.

UPDATE 12:30pm David Helmer responded to the same set of interview questions. Here are his responses.

TheAuctioneerChannel is a video outlet where the auction industry can be represented in all its forms. A virtual free-for-all for what is out there. We want people to see what’s happening from the auctioneers perspective.

The website was the brainchild of Scott Vander kolk Jr. and me. He had a vision for what could be done and I was very interested in seeing where we could take it. This site is really what it says it is – “capturing the culture of the auction industry”. We have no agenda, just trying to tell the story.

The audience is auctioneers, potential sellers, buyers, and hopefully the new group of viral surfers. We have a few big ides to roll out, but the one that makes sense and will hopefully take off is video profiles of every auctioneer. We have the hope that potential buyers could use this as a sort of yellow pages. Also, we want to promote auctioneers and work with associations and anybody that will have us to promote the industry. Can you imagine if every time you were introduced to do a benefit auction or at a speaking engagement they played a short video of you, made by you, telling who you were and what you do? It would be great. We hope to be that medium.

As far as original programming we have a lot in the hopper. We want some to be educational and some to be entertaining – sort of video blogs, how to, what’s it going to bring and more.