Even though our enjoyment of Twitter has caused Facebook to go the way of MySpace for us at AuctioneerTech – something checked infrequently, usually at the behest of the automated emails sent any time something happens – we still recognize the importance of contact lists. The hundreds – some have thousands – of friends on Facebook constitute a very large and fairly complete list of self-updating contacts. The WebOS on the new and highly-anticipated Palm Pre recognizes this fact, and will draw this contact information from social networks to maintain the phone’s contact list. 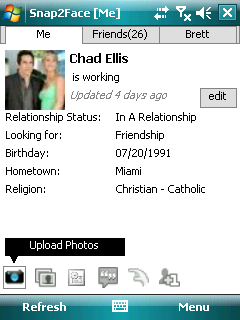 We’re still sulking around with Windows Mobile while we count down the days until the release of the Pre, due out sometime in the next few months. A few days ago, we stumbled upon the Skybook Facebook client.

Skybook is similar to other social networking apps for mobile devices. It allows you to update your status and view the status of your friends. You can interact with most of the normal functions of Facebook better than the m.facebook.com mobile interface available by using Facebook simply in a mobile browser.

The real value of Skybook is the ability to upload mobile photos and synchronize contacts. Synchronizing Facebook contacts to a Windows Mobile device means that those contacts can then be synchronized to Outlook or, better yet, Microsoft Exchange. The contacts carry with them the current profile picture of each of your friends, so when they call from the number listed the phone will show picture caller ID.

The sync process takes a while the first time, prompting you if you want to create new contacts for those Facebook friends who don’t already exist in your contact list. It did an impressive job guessing – and asking to be sure – that the Christine listed on Facebook was the Chris that was listed on the phone.

The reviews on the Skybook page are very mixed, with some users reporting difficulties. While it locked up a couple times in our use so far, the benefits of having the up-to-date contact information for all our friends on Facebook greatly outweigh the occasional annoyance of having to re-launch the application.

Have you used Skybook? Do you know of or prefer a different Windows Mobile Facebook client? Let us know in the comments.