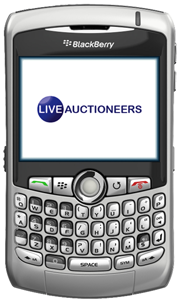 In July, Internet bidding provider LiveAuctioneers announced the release of an iPhone application that allows its users to view auction inventories as well as to participate in auctions by placing pre-auction Internet bids.

Yesterday, LiveAuctioneers announced the release of an application for BlackBerry devices that has similar functionality but, unlike the iPhone application, is free to download and use.

While some other auctioneers attempt to deliver their bidding pages  so that they render easily in mobile browsers, LiveAuctioneers is instead developing applications that run natively on the devices. This approach has the benefit of creating a more controlled user experience for the supported devices. Unfortunately, it only works for supported devices. We still haven’t seen any provider release an application for Windows Mobile or the Palm Pre, though we’re guessing someone’s working on it.

NEW YORK – Following closely on the heels of its revolutionary iPhone application (“app”) with auction-bidding capability, LiveAuctioneers App Technologies has announced the release of a similar product for Blackberry devices. The new Blackberry “app” has the capability to connect users with catalogs from any auction house utilizing LiveAuctioneers.com’s Internet-bidding services. Additionally, it is the first Blackberry app to enable absentee bidding through LiveAuctioneers. It also includes an auction archive search function for accessing prices achieved in past sales.

The app is compatible with all current Blackberry models – Bold, Storm, Curve, Pearl Tour and 8800 series – and supports all major Blackberry service providers.

“We fully expect that Blackberry users within the fine art and antiques community will embrace this innovative technology, which includes immediate access to any auction catalog listed on LiveAuctioneers and the ability to leave absentee bids through our Secure Bidder Network (SBN),” said LiveAuctioneers LLC’s CEO Julian R. Ellison “With SBN functionality, which is unique to LiveAuctioneers, your absentee bid is kept private and unknown to anyone until auction day, when it goes direct to the auction house.”

Ellison said he placed top-priority status on the development of the iPhone and Blackberry apps because he wanted both to be finalized and available for download in advance of the fall auction season.

“From conversations we’ve had with auctioneers who use our services, we believe the next quarter may be the busiest ever for LiveAuctioneers,” Ellison said. “Some very exciting sales are going to be announced, and now with the addition of our new apps, auction houses will see bids coming in from all directions. There’s no reason why anyone should miss out on bidding now that our app technology is so widely available.”

The LiveAuctioneers app for Blackberry devices is free of charge and can be downloaded by visiting http://www.liveauctioneers.com/Blackberry.

Have you tried either of the mobile bidding applications from LiveAuctioneers? Let us know it worked in the comments.